Cleveland, who was registered blind and lived in Lambeth in south London, fell from platform 1 into the path of the 19.05 train on 26 February 2020.

The jury at South London Coroner’s Court, Davis House, Croydon, was asked to consider whether the absence of tactile paving caused or contributed to the death of Cleveland, who had only six per cent vision in one eye and no vision in the other and walked with a walking stick which was painted white by his partner. 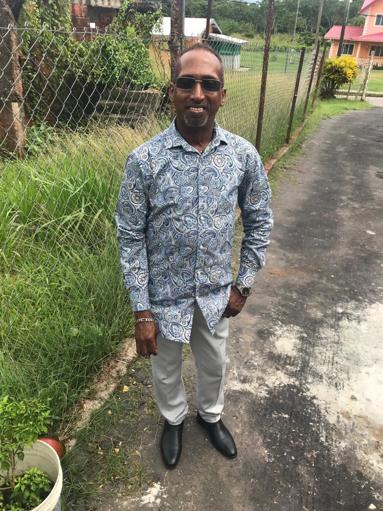 Originally from Trinidad and Tobago, Cleveland had been living with HIV for over 30 years and volunteered as a counsellor at an HIV charity in Bromley. He was well known in his local area and in his younger days he loved going out and dancing in the gay clubs in Vauxhall, where everyone knew him. Despite his diagnosis of Cytomegalovirus (CMV) Retinitis, Cleveland was able to travel independently and used trains when he needed to travel around London.

On 26 February 2020, Cleveland met friends for lunch. He left the pub at 18.30 with a friend and walked to Eden Park Station, arriving at 18.50, where he and his friend departed company. Cleveland waited on platform 1 for the arrival of the 19.05 train.

The inquest had heard that after Cleveland fell on to the track, Rachel Simmond called 999 and spoke to Cleveland until the emergency services arrived. Fire brigade and ambulance service staff arrived at around 19.17 but there was a further delay of about 10-12 minutes in getting help to Cleveland after emergency services staff were unable to determine whether the rail power supply had been turned off until a member of Network Rail staff arrived at the scene.

At around 19.28 ambulance staff were allowed to go on to the track to assess Cleveland. He was removed from under the train at 19.42 and was pronounced dead at 20.00. Cause of death was given as multiple injuries.

The jury also concluded that a decision not to access Cleveland until there was confirmation on the scene from the Railway Incident Officer led to an avoidable delay which caused or more than minimally contributed to his death.

“Cleveland was a kind, generous and loving family man who had incredible determination and never let his disabilities stop him from getting on with his life. He was always helping other people and had a great sense of humour. We were together for over 19 years and we loved each other very much. He was my rock and I am lost without him.

“I am grateful for the jury’s careful deliberations and welcome their findings that the lack of tactile paving, or any other adjustments for blind and visually impaired people, caused Cleveland’s death. Cleveland’s death was huge blow to me and all that knew him. I hope that from his death lessons will be learned and that rail stations will become a safer places for those with visual impairments.

“We welcome this week’s inquest as an opportunity for essential lessons to be learned, so that such a senseless tragedy never happens again. Cleveland’s death was not an isolated incident. We are aware of several similar occurrences where the lack of tactile paving may have contributed to blind or partially sighted people falling onto railway tracks.

“Tactile paving is not just an accessibility measure, it is fundamental to the health and safety of passengers and pedestrians. There should be no train platforms without tactile paving.

“We are pleased that Network Rail has recently stated that it intends to speed up the installation of tactile paving on all British train platforms where it is missing, although this is still subject to funding and formal approval from the Department for Transport. We strongly urge the Rail Minister Wendy Morton to confirm the necessary funding as soon as possible.”

“We have heard how Cleveland was an outgoing and sociable man who enjoyed travelling within London to meet his friends independently. He should have been safe to do this but his inquest this week has sadly heard that the lack of tactile paving at Eden Park station, and lack of any risk mitigation measures, made it a dangerous place for him and anyone else with visual impairments.

“We are grateful that the coroner has allowed the jury to examine the circumstances around Cleveland’s death and for Royal National Institute for the Blind (RNIB) who gave evidence about the importance of tactile paving. It was concerning to hear that despite national guidance on tactile paving being in place since 1998, that Network Rail do not consider that they have any legal duties to install it across the network. While we understand that plans for installing tactile paving across the rail network have been accelerated following Cleveland’s death, it is unacceptable that platforms are not consistently safe for passengers with disabilities.

“The jury, having heard the evidence, concluded unanimously that the absence of tactile paving caused Cleveland’s death and that in the absence of tactile paving, other action could have been taken to avoid his death. The jury also found that after Cleveland had fallen from the platform, there were insufficient steps taken to confirm the power to the train lines was switched off and hence an avoidable delay in reaching Cleveland also contributed to his death.”

Norfolk Council agrees to change its communications to blind residents

Norfolk County Council has agreed to implement a system that will change the way it communicates with blind residents in receipt of social care, following a six-year fight by resident Rachael Andrews.