A family who lost the entire contents of their home in a house fire allegedly caused by a tumble dryer have received a substantial out-of-court settlement from Hoover Limited.

Simon and Sarah Core, of Lightwater, Surrey, alleged that the Hoover Candy DMCD101SB condensing tumble dryer purchased from Currys had caused the fire either because of an ingress of lint into the machine and/or because of a faulty thermostat within the appliance.

The out-of-court settlement was reached without any admission of liability or fault on the part of Hoover Limited.

Hoover Candy tumble dryers are distributed in the UK by Hoover Limited, a subsidiary of Candy Group S.p.A in Italy who are, in turn, owned by the Chinese multinational home appliances company Haier.

Simon and Sarah said their Hoover tumble dryer caught fire during a drying cycle one afternoon in January 2018. Sarah came home and noticed a funny smell and opened the door to her tumble dryer and saw the contents glistening.  Within a short time, the whole of the downstairs of the property was on fire. Simon and Sarah and their two children were unhurt but their pet cat was found unconscious due to smoke inhalation and had to be revived by the emergency services. Fire crews were at the home for seven hours. The whole of upstairs was smoke damaged and the family lost everything. They had to live in a hotel for two weeks, then rented accommodation for 12 months. 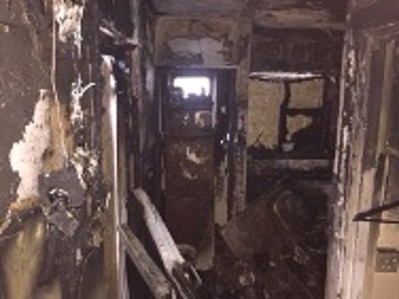 Photograph of the fire provided by the family.

The family’s claim was brought under the Consumer Protection Act 1987 against Hoover Limited on the basis that the safety of the product was not such as persons generally are entitled to expect in that the Hoover Candy tumble dryer caused the fire.

The claim was robustly defended and Hoover denied that the Hoover Candy tumble dryer was to blame for the fire.  They put forward the theory of self-heating, saying the towels that had been drying inside the tumble dryer had been contaminated with peroxide, which the family denied.  The company also argued that Sarah, a mobile hairdresser, was to blame for failing to wash out any peroxide on the towels before putting them into the tumble dryer, and for the way she acted after discovering the fire.  They said she failed to take common-sense steps to prevent the fire taking hold, including by turning the appliance off at the mains and dousing the contents of the drum with water.

Photograph of the fire provided by the family.

The case was dealt with by the Technology and Construction Court and settled shortly after the parties had been ordered to provide extended disclosure.  For Hoover this meant a direction to provide the family with various documents, including data relating to past adverse events relating to Hoover Candy tumble dryers of the same or similar design which had been reported to have been catching fire, overheating, smoking, flaming, exploding, and experiencing an ingress of lint.

Leigh Day had previously written to the Office of Product Safety and Standards with their concerns about the Hoover Candy tumble dryers and later to Business Secretary Kwasi Kwarteng MP to ask him to urgently intervene as they had uncovered a wealth of data suggesting a previous pattern of fires with these machines.

“The fire wasn’t our fault.  It was terrifying to have something like this happen to your family.  Leigh Day were lovely, caring and understanding.  They worked so hard to get us this outcome.  We now feel like we can start to move on with our lives. We want to make sure this doesn’t happen to anyone else.”

“We are delighted to have achieved this outcome for the Core Family.  Consumers have the right to expect that the products in their home are safe.  We are so pleased that the family can now hopefully draw a line and start to move forwards with their lives.”