Campaigners signal their intention to bring a legal case against the Government if they don’t remove the 14-day self-isolation requirement from the latest update to guidance.

Campaigners supporting families with loved ones in care homes have signalled their intention to bring a legal case against the Government if they don’t remove the 14-day self-isolation requirement from the latest update to guidance to care providers.

John’s Campaign, represented by Leigh Day solicitors, have sent a pre action protocol letter to the Department of Health and Social Care (DHSC) calling for the requirement to be lifted completely.

The latest update to the Guidance to care providers ‘Visits out of care homes’ eases the 14-day isolation requirement so that residents can have medical appointments, be in contact with others outdoors and go to a day centre or a place of worship. However, the easing of the restriction does not allow an overnight visit home and still imposes the 14-day rule on new residents and people returning from a stay in hospital.

John’s Campaign says in its letter to the DHSC that it will apply for judicial review of the 14-day isolation rule if it is not lifted and if future guidance does not make clear to providers that individualised risk assessments should inform all decisions on visits out and whether self-isolation is needed.

It says the rule is unlawful on the following grounds:

In their letter to the DHSC, John’s Campaign give examples of the heartbreak and pain that the 14-day self-isolation rule is causing.

A family whose frail 91-year-old mother had to be admitted to a care home at short notice had to isolate in a room she had never seen, in a place she didn’t know, with people she had never seen before for 14 days, said: “We went through hell trying to imagine how she felt. In the meantime, Mum has lost even more weight, has become even more estranged from reality, has lost her feisty independence, has still not got her hair cut, we still don’t know if she’s had her second jab (they don’t seem to know), is very tearful, has had nothing to do, is losing all ability to carry out things like turning on the tv or making a cup of tea because all this has been taken away.”

A family whose daughter in her 20s is not allowed to visit home said: “Our daughter is at the level of a toddler, and who would recommend a toddler, with a history of mental health problems, who struggles to understand what people are saying; who can’t understand why she can’t come home every three weeks, as she has done for the last 10 years; couldn’t go to their parents’ home and community, unless they isolate for 14 days on their return?”

A woman whose 57-year-old husband needs to go into hospital every few weeks to have throat procedures and is now in more or less constant self-isolation in his room describes his situation as “inhumane”.

In line with requirements under the pre-action protocol and the duty of candour that applies, John’s Campaign’s letter asks the DHSC to disclose

Any clinical advice or scientific data relied upon in maintaining the requirement to self-isolate for 14 days (both at all and for that length of time);
Details of the persons and organisations consulted when the Guidance was updated 14 May 2021, including scientific and medical experts;
Any Equality Impact Assessments carried out in relation to the Guidance, specifically in relation to the 14 day self-isolation rule;
Evidence of Public Health England’s advice in respect of the 14 day self-isolation rule in care homes.

John’s Campaign is led by Julia Jones and Nicci Gerrard.

“We can see no scientific rationale for isolating individual residents when staff and visiting professionals within the care home community have no restriction on their movement (other than those applicable across the country). Even more seriously how can the Government advisers continually overlook the appalling effect of confinement and isolation on those least able to understand or survive it? No other individuals in our society, testing negative for covid, have this punitive threat issued against them. Does this government worry more about the imprisonment of pets than people?”

“We will continue to challenge government guidance on care homes until it ceases to discriminate against people living in those homes, stripping them of their freedom, their dignity and their autonomy in a way we find both bewildering and cruel.”

“John’s Campaign have been inundated with heart breaking stories from families for whom this blanket requirement to self-isolate for 14 days on admission to a care home and after overnight stays is causing huge damage and distress. Our clients are calling on the Government to remove the blanket requirement and make plain that any admissions into care homes or visits out, including overnight stays, should be risk assessed on a case by case basis taking into account vaccinations and testing and ensuring that the wellbeing of residents is at the heart of decision making.” 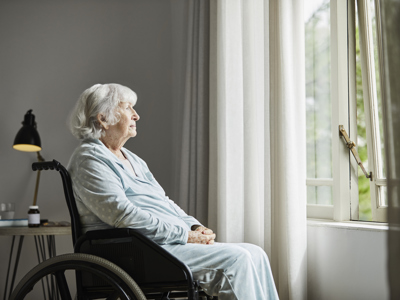 With guidance to care providers due to be updated this week, John’s Campaign is repeating its call to see all requirements for 14-day self-isolation to be dropped.

John’s Campaign are threatening to bring legal proceedings if the requirement to self-isolate for 14 days after a visit out is not dropped.