E-Scooters: wise up before you hit the road

Electric scooters, or e-scooters, are becoming an increasingly popular mode of transport. Seen as a simple, eco-friendly and cheap form of travel, their advent has been welcomed by many.

Government trials for e-scooters were brought forward due to the Covid-19 pandemic and social distancing, and at the beginning of 2020 e-scooter rental schemes were rolled out across the UK.

However, at present there seems to be a lot of confusion about who can use them and where. There are also a number of safety concerns to take into consideration before their use can be embraced more widely.

What is an e-scooter?

Electric scooters are similar to normal, two-wheeled manual scooters, but they are propelled by a motor and require charging on a regular basis. Most have a folding frame so that they are easy to store. Their batteries are generally lithium-ion, which is relatively quick to charge and lighter to carry around, but some scooters have lead-acid batteries.

Given that e-scooters are readily available to buy in shops and online, and are seemingly everywhere on the roads and pavements, you might be shocked to discover that private scooters are not legally allowed to be used on public roads. If you own an e-scooter, you can use it on private land, but the only e-scooters that are currently allowed on public roads are those that are rented as part of the government trials.

E-scooters, and other mechanically propelled types of transport such as Segways and hoverboards are known as “powered transporters” and are currently treated as “motor vehicles” under the law. This means that to be allowed on the roads, they would need to have a number plate, road tax, lights and other requirements.

There are currently more than 50 towns and cities across England taking part in e-scooter trials. The trials tend to be focused on urban areas, with the aim of targeting pollution and congestion.

Provided that the criteria to ride are met, you can download an app, register and get going. Trial e-scooters need to be covered by a motor vehicle insurance policy which the rental operators are expected to have in place. This means that if the rider is involved in an accident themselves or injures someone else, there should be cover. Riders also need to have a valid driving licence.

In November 2021 the Department for Transport published national statistics concerning e-scooters. Unfortunately, the document offers no differentiation between scooters involved in trials and privately owned scooters. The main figures for the year ending June 2021 are reported as follows:

Also in November 2021, Greater Manchester Police revealed that they had seized nearly 150 e-scooters in the last year due to them being ridden illegally or for being involved in a crash.

When will the rules about e-scooters be reviewed?

With so much confusion out there and such a high proportion of illegal usage, it is clear that the law needs to catch up to reality and that regulations / legislation concerning e-scooters need to be clarified / brought in as soon as possible. Unfortunately, however, legislation has been put on hold and the e-scooter trials are to carry on until late 2022.

E-scooters have also been linked to fire safety issues. On 13 December 2021 Transport for London banned the use of private e-scooters on the capital’s transport network. This followed two reported fires involving e-scooters, one on a tube train and one in a lost property office.

London Fire Brigade have raised concerns about private e-bikes and e-scooters due to the fire risks associated with lithium-ion batteries, conversion kits and also the use of incorrect chargers. Their top tips for safety with these products are: 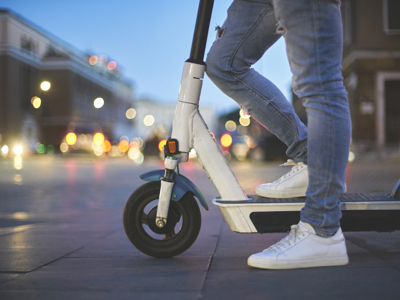 Product safety lawyers have welcomed the Transport for London ban on private e-scooters on the capital’s transport network.