Following announcement of the launch of a legal challenge by John’s Campaign which prompted a public outcry over the Easter weekend, an age requirement has been dropped from government guidance on visits out for people living in care homes.

The Department of Health and Social Care (DHSC) this week published an update to new guidance it had issued 8 March 2021, which no longer restricts visits out to those residents of working age.

However, the document still includes a requirement for residents who do take visits out of their care home to self-isolate for 14 days on their return, regardless of the type of visit. John’s Campaign will continue to press the DHSC to remove this element, which the DHSC itself has recognised “is likely to mean that many residents will not wish to make a visit out of the home.”

Since the launch of John’s Campaign’s legal challenge to the 8 March guidance hit the national news over Easter weekend, co-founders Julia Jones and Nicci Gerrard have been overwhelmed by calls from people whose loved ones are badly affected by the guidance.

They spoke of their anger and heartbreak at being separated from loved ones, many of whom have chosen to move into care homes, but now, despite being fully vaccinated, have no hope of visits out to see their families and friends or even for a walk in the park.

Those who have contacted Julia and co-director Nicci Gerrard include: (names have been changed)

“My dad cannot live with the threat that if he wants to be taken out for a walk in the park, he then has to stay isolated in his room for two weeks. The risk of being isolated is too much, he can’t cope with the isolation period. The days are long and hard enough as it is. He’s done it before with Covid and he doesn’t want to experience the severity of the isolation and loneliness he felt for 14 days on his own, so he doesn’t have a choice, there is no choice. He’s disheartened. He feels completely separated from regular life. The reality of his situation is one of loneliness and isolation and of no outlook. He lives in a home where he has caught Covid already but the hardest part is that he has nothing to look forward to. He keeps saying “I just want to get out”. He doesn’t have an en-suite room so when he previously had to self-isolate he had to use a commode in the room. It’s just so dire.”

“Robert would never be able to do 14 days isolation. He wouldn’t be able to comprehend it.
I hate lying to Robert every night, asking if he can do a couple more days for me. He says “I am being good mum but when am I coming home?”. We desperately miss him and feel as parents that all of our rights and Robert’s rights have been taken away, it’s like we don’t have any.”

“I wouldn’t go near any human being and I wouldn’t want my mum to be. I have been so careful.

“Mum’s dementia hadn’t progressed too much before the pandemic, she was very verbal, but now that has more or less gone. I know people say that would have happened anyway, but its progressed so much because she’s been denied the opportunity to engage with people and other external things.”

“I'm at my wits’ end with these outrageous deprivations of liberty and mental abuse of entirely innocent and powerless people. I asked my mother what she wanted for Christmas and she said she didn’t want anything but to come to visit me and my family.”

John’s Campaign, which has campaigned for the rights of families and care homes residents throughout the Covid-19 pandemic, sent a pre-action protocol letter to the DHSC over the 8 March guidance to say that the imposition of a blanket ban on visits out, and the failure to communicate and ensure individualised risk assessments are taken for every resident who wishes to make a visit out, is unlawful.

The letter also questioned the requirement for self-isolation on return for 14 days. Since care homes now have rapid testing, designated visitors are permitted, and residents are vaccinated, this is unnecessary, say John’s Campaign. It is also at odds with reduced self-isolation requirements in other contexts such as after travel abroad.

Individualised risk assessments, which take account of an individual resident’s specific characteristics and needs are necessary in all circumstances according to the Equality Act 2010, Human Rights Act 1998 and Care Act 2014 and should also inform decisions in relation to self-isolation requirements.

“I find myself amazed at the government's callous acknowledgement that obliging people to self-isolate for 14 days after a trip out will deter people from leaving the 'homes' where they have been stranded for over a year. There is no logic to this - care staff come in and out every day with no restriction on their community interactions. Young men and women with learning disability or autism are being denied the opportunities guaranteed in their care plans and older residents are missing the sweetness of the outside world during the last years of their lives. This seems massively discriminatory and a contravention of Article 5 of the HRA - particularly for people with full mental capacity who have not given their consent to this form of detention.”

John’s Campaign is represented by Tessa Gregory and Carolin Ott of Leigh Day.

“It cannot be right that every time a resident leaves their care home, regardless of the nature of the outing, regardless of who they are seeing, regardless of the precautions being taken and whether or not they have been vaccinated, that they then be required to self-isolate for 14 days on their return. The Government needs to urgently act and amend the guidance to enable care homes to take a more nuanced, sensible approach on much needed visits out.”

John's Campaign, a group which campaigns for people with dementia to be supported by family carers, has issued urgent court proceedings challenging the Department of Health and Social Care (DHSC) guidance for visiting in care homes (“the Guidance”). 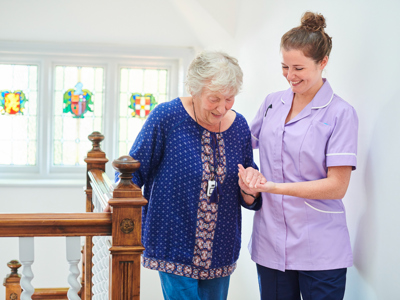 Campaigners credited with changing the government's mind on care home visiting during the COVID-19 pandemic are challenging guidance on residents' trips out, including over Christmas.

Campaign group John’s Campaign has launched a legal challenge against the Department of Health and Social Care regarding a blanket ban on visits out of care homes by residents aged over 65 and the requirement for those who are permitted to leave the care home to self-isolate for 14 days on their return.