Seán, who is a 27-year-old law graduate, was arrested on 21 August 2018 alongside other volunteers and charged with a number of serious criminal offences connected to search and rescue work he carried out as a volunteer for a humanitarian NGO in Lesbos, Greece.

Following his arrest Seán was detained in a Greek prison and jail for a total of 106 days. He was charged with several offences including formation and membership of a criminal organisation, facilitation of illegal entry, infringement of state secrets, possession of a radio without a licence, money laundering, espionage and forgery.

If found guilty Seán could face up to 25 years in prison. Seán is due to go on trial in Greece on 18 November 2021 for some of the less serious ‘misdemeanour’ charges but no trial date has yet been set for the more serious criminal charges he faces.

The charges against him relate to a period in 2017 and 2018 when he was volunteering on search and rescue missions for Emergency Response Centre International (ERCI), a Greek not-for profit organisation that provided emergency responses and humanitarian aid in Lesbos.

Amnesty International, who are supporting Seán in his case, have documented how police and prosecutors in Greece and across the European Union have mis-used flawed anti-smuggling laws and counter-terrorism measures to target human rights defenders who help refugees, asylum seekers and migrants, charging often young volunteers with “facilitating illegal entry” and other crimes for humanitarian and search and rescue work.

Leigh Day have commissioned a legal opinion on the legality in international law of his arrest, pre-trial detention and proposed trial for alleged offences committed whilst volunteering on search and rescue missions for ERCI.

The legal opinion, provided by Edward Fitzgerald QC of Doughty Street Chambers, and Gráinne Mellon, of Garden Court Chambers, concludes that there have been several serious breaches of international human rights law in Seán’s case to date. The opinion states:

“We have  serious concerns as to the basic compliance with international human rights law in this case and consider that a series of breaches of Mr. Binder’s fundamental rights have already occurred. In our view the proposed trial  on 18 November 2021 risks further serious violations of international human rights principles. We call on the Greek authorities to urgently review the conduct of this criminal trial- in both substantive and procedural terms- and to consider whether or not it can or should proceed.”

“Mr. Binder’s search and rescue work sought to protect the life, health and physical integrity of men, women and children at sea and immediately on arrival in Greece.  A proper application of the duty to provide assistance- and the exemption for humanitarian work- in international law should in our view serve to protect him from prosecution for this work.”

The summary of conclusions in the opinion are as follows:

“On the basis of the evidence we have seen, we believe that there have been serious breaches of Seán’s human rights by the Greek authorities in relation to his detention, the charges brought against him and the delays in hearing his case in court. Seán’s case is important as it shows what appears to be a disturbing trend towards criminalising human rights defenders who are working for recognised NGOs seeking to help refugees. We urge the Greek authorities to review Seán’s case immediately to prevent any further potential breaches of his human rights. Urgent reconsideration needs to be given to whether his criminal trial should go ahead at all.”

“We are not criminals, neither are we heroes, providing assistance to people in distress is necessary - nobody should be abandoned to drown. My actions were guided by the duties enshrined in international maritime law and the European Convention on Human Rights. Now Greece should be guided by Europe’s commitment not to criminalise humanitarian activity and its obligations under International Human Rights Law, including the ECHR.”

Seán Binder is a 27-year-old German citizen who grew up in Ireland and is currently based in London where he is training to become a barrister. He is a graduate of Trinity College Dublin and the London School of Economics. He travelled to Greece in 2017 to help volunteer with search and rescue work with Emergency Response Centre International (“ERCI”). ERCI is a Greek registered civil non-profit organisation with the aim of providing humanitarian aid to humanitarian crises and natural disasters. It was registered and authorised in Greece and its staff and volunteers regularly worked in conjunction/co-operation with the Greek authorities.

Seán is a rescue diver and trained maritime search and rescuer and also holds a Level 2 powerboat licence. His voluntary commitments for ERCI included search and rescue operations in ERCI rescue vessels, a nightly presence of first response team members on shore in South Mytilene from midnight to 7am, providing immediate humanitarian assistance to those landing at shore.

In August 2018 he was arrested, alongside other volunteers including Sarah Mardini, and charged with a number of serious criminal offences connected to search and rescue work he carried out as a volunteer for ERCI in Lesbos, Greece. If found guilty of these offences he faces up to 25 years in jail.  His trial has been delayed for over three years. An initial date for a trial on some of the more minor offences Mr Binder is charged with has now been set for 18 November 2021. The outstanding and more serious felony offences remain with the investigator’s office and have not yet been set down for trial.

Greece has on a number of occasions used anti-smuggling legislation against NGOs working in refugee rescue and other activities. In 2018, members of the Rescue NGO Proem-Aid, and of the NGO Team Humanity, were acquitted following a trial on smuggling charges. In October 2020, criminal charges related to smuggling and other offences were announced against 33 NGO members.

There is widespread concern in civil society of a creep towards criminalisation of humanitarian action, in particular in the sphere of migration and a clamp down on civil society actors in this area. In April and September 2020, Greece introduced rules that severely limit NGOs’ ability to work on migration and asylum and access official camps, and in October and November, independent refugee shelters were closed. 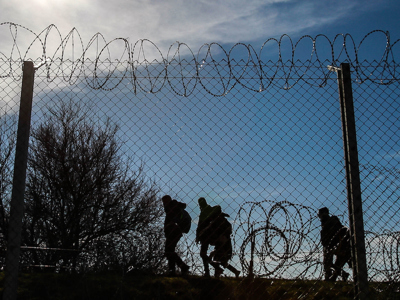