A severely disabled young man is applying for judicial review of a rule which halted payment of his welfare benefit after he had been in hospital for more than four weeks.

Cameron Mitchell, aged 20, of Carlisle, cannot walk or speak, he suffers frequent seizures and muscle spasms and is fed through a tube. He has had frequent stays in hospital and most recently, during a lengthy stay in hospital and then a hospice, his Personal Independence Payments (PIP) and his mother’s Carer’s Allowance payments were halted under the “hospitalisation rule” which suspends a disabled person's entitlement to PIP if they have been in hospital for more than 28 days. 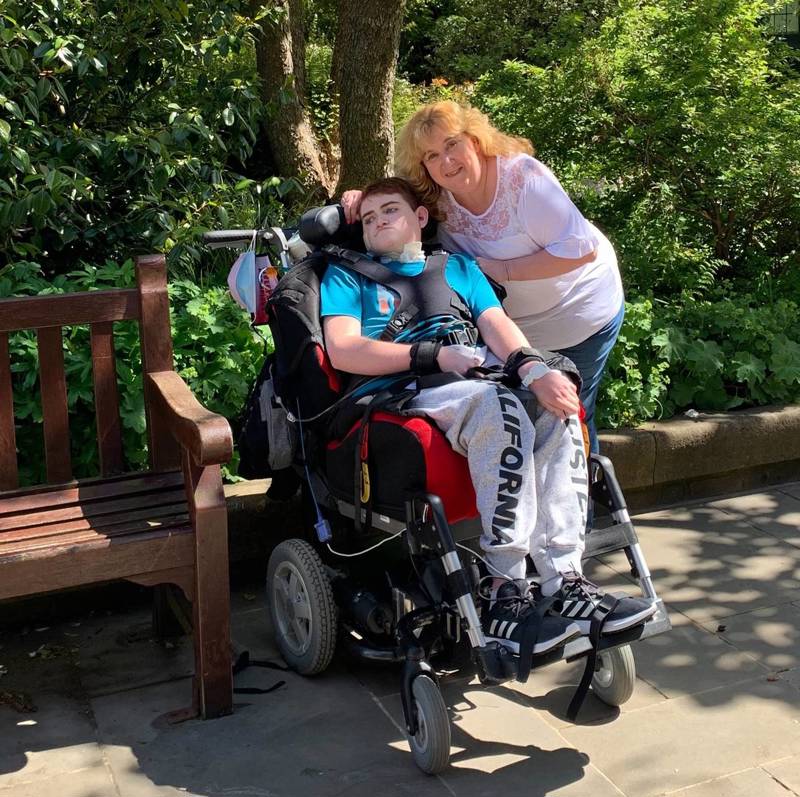 Cameron claims the requirement to suspend PIP in Regulations 29 and 30 of the Social Security (Personal Independence Payment) Regulations 2013, is unlawful because it breaches his human rights under Article 14 ECHR read with Article 8 and/or Article 1 of Protocol 1 and is irrational.

He argues that the DWP’s failure to provide for an exception to the hospitalisation rule for people with his disability is a failure to treat him differently in breach of Article 14, which protects him from discrimination.

Cameron was in Royal Victoria Infirmary for 185 days, from December 2020 until June 2021, when he was moved to a hospice for step-down care.

Cameron Mitchell with his father, Kevin

Under the hospitalisation rule his family lost more than £5,000 in benefits payments. However, Cameron’s needs are so severe that, despite hospital care, his parents are still needed to provide essential care to ensure that Cameron’s needs are met. The medical staff in the hospital relied on Cameron’s parents to: spot when a seizure is imminent, to interpret his pain and communication signals, assist with his mobility, to provide meaningful stuimulation and be available 24/7 to assist with his care when asked. Despite the loss of benefits they had to continue providing the care and incurred additional costs of about £100 per week on food and transport alone.

After his benefits were suspended, Cameron’s mother Nicola Clulow wrote to the DWP to ask them to reconsider the move, because his disabilities mean he continued to require care from his parents while he was in hospital.

Her mandatory reconsideration request was made on 1 June and a pre-action letter under the pre-action protocol for judicial review claims was sent by Leigh Day on Cameron’s behalf on 8 July 2021.

The DWP responded that a mandatory reconsideration decision would be made and that this was capable of resolving Cameron’s proposed judicial review claim. But on 7 September 2021 the DWP decided that although it was accepted that Cameron’s needs meant that his parents had to continue to support him, Regulations 29 and 30 required application of the hospitalisation rule and permitted no exceptions. Cameron (acting through his mother as his litigation friend) is therefore now pressing ahead with his judicial review claim.

The DWP claims that the hospitalisation rule is based on the principle that the needs of the claimant are being met by the National Health Service (NHS) and that to continue to pay these benefits after 28 days, in order to support the additional costs of having a disability, would amount to double provision of funding from the public purse. Cameron is arguing that this is at odds with the recognition that his parents are needed to continue caring for him while he was in hospital.

The family say Cameron’s case is very similar to that of Cameron Mathieson, a five-year-old Warrington boy whose family challenged a similar DWP rule which axed his Disability Living Allowance (DLA) (which is now being replaced by PIP) after he had been in Alder Hey Hospital, Liverpool for more than 84 days in 2015. In that case the Supreme Court ruled that suspending a child’s DLA after 84 days in hospital breached his human rights.

Cameron’s claim is supported by evidence from Royal Mencap Society, the Professional Lead on Learning Disability at the Royal College of Nursing, Carers UK, Marie Curie and the Association for Real Change (ARC) UK.

“We are requesting this review to the PIP 28 day hospitalisation rule on behalf of Cameron and many other adults just like him, who due to complex and multiple profound learning disabilities, cannot have all of their needs met by the NHS while in hospital.
Cameron requires the constant care and knowledge of his needs from a known carer whenever he is hospital. This doesn't change on day 29, but the financial means to enable us to provide this support does.”

“The Secretary of State accepts that as a result of Cameron’s profound and multiple learning disabilities he cannot be effectively cared for without assistance from his known carers, his parents.

“Yet the provisions Cameron is challenging do not support known carers to continue providing the essential care required. A one-size-fits-all approach does not work for patients like Cameron and it is crucial that severely disabled patients’ complex needs are taken into account throughout their hospital or hospice stay, and not disregarded after 28 days.”

The hospitalisation rule can also apply to other in-patient settings like hospices, but there is an exception for people who are within the final six months of their life and therefore deemed to be terminally ill. Benefits will not only be suspended after 28 consecutive days in hospital (or a similar setting) but also be suspended if an individual is in an in-patient setting for several shorter stays that amount to more than 28 days and are within 28 days of each other.

A severely disabled man is challenging a rule which halted payment of his welfare benefit after he had been in hospital for more than four weeks.