A legal class action case is being prepared against Anglo American South Africa Ltd on behalf of Zambian communities living in the vicinity of the Kabwe lead mine who are suffering from lead poisoning.

This is the worst environmental disaster I have seen in 30 years of practice.  There is incontrovertible evidence of staggeringly high levels of lead in the blood of a substantial proportion of the local population in Kabwe, particularly among very young children."

Richard Meeran, head of the International department at Leigh Day

Kabwe was the world’s largest lead mine and operated from around 1915 until its closure in 1994. From 1925 to 1974, its most productive period, the mine was owned and operated and/or managed by Anglo American South Africa Ltd.

The mine is situated in close proximity to villages comprising around 230,000 residents. Tens of thousands of Kabwe residents are estimated to have developed high blood lead levels, mainly through ingestion of dust contaminated by emissions from the mine smelter and waste dumps. A series of published reports has found very high levels of lead in the blood of a substantial proportion of the local population, in particular very young children.

Johannesburg attorneys, Mbuyisa Moleele, in collaboration with London-based human rights law firm, Leigh Day, have been investigating the case and liaising with the local communities for the past two years. They have so far been instructed on behalf of almost 200 children who have been treated for lead poisoning. They are preparing the class action in South Africa and an application to certify a class action will be filed in the Johannesburg High Court. The purpose of the action will be to secure compensation for victims of lead poisoning, including the cost of an effective medical monitoring system for blood lead levels among the community.

A report was published today by Human Rights Watch titled “‘We Have to Be Worried’: The Impact of Lead Contamination on Children’s Rights in Kabwe, Zambia,” which examines the effects of lead contamination in Kabwe on children’s rights to health, a healthy environment, education, and pla

In 2012, the US Center for Disease Control revised down its threshold standard from 10 μg/dL to 5 μg/dL. This was due to medical evidence indicating a lowering of children’s IQ at levels as low as 5 μg/dL.

According to the World Health Organisation (WHO) some of the problems associated with lead poisoning in children range from reduced IQ, behavioural problems and reduced growth to severe anaemia and kidney damage, and in the worst cases can cause brain damage and even death.

In Kabwe, in young children aged up to five years old, published studies have consistently found massively elevated BLLs. In the most affected townships around Kabwe around 50% of children have BLLs higher than 45μg/dL the threshold above which medical antidote treatment is required. Nearly all the children in these areas have BLLs above 20 μg/dL, the level at which urgent action is required to reduce exposure. 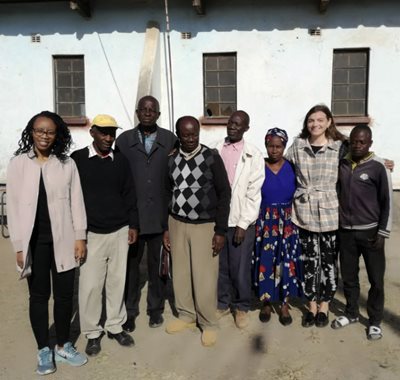 The scale of this environmental health disaster has been evident for decades. For example, a 1972 medical journal article referred to extreme lead pollution in the Kabwe area. A 1975 thesis by a Dr A.R.L. Clark from the London School of Hygiene and Tropical Medicine found that children in Kasanda, especially infants of 1-3 years, had strikingly high average BLLs of up to 103 μg/dL.

The case will be brought in the South African courts where the head office company and proposed defendant, Anglo American South Africa Ltd, is based. It is alleged that from 1925 to 1974, Anglo American SA played a key role in the management of the medical, engineering and other technical services at the mine, and that it failed to take adequate steps to prevent lead poisoning of the local residents.

“Doing these cases I am always dismayed by the inequality and disregard shown by multinational companies like Anglo American. The founders of Anglo American are hailed as trailblazers as they created generational wealth for themselves, their families and investors yet at the same time we believe their operations have caused trans generational poverty and ill health for their workers as well as the environment. In this case we will argue that the environmental damage created has potentially contaminated almost three generations of men, women and children.”

“This is the worst environmental disaster I have seen in 30 years of practice.  There is incontrovertible evidence of massive lead contamination of soil in local villages and of staggeringly high levels of lead in the blood of a substantial proportion of the local population in Kabwe, particularly among very young children. This would not have been tolerated in Europe or the US. As a major multinational that holds itself out as a responsible corporate citizen, we believe Anglo American should compensate the lead poisoning victims and assist, practically and financially in the prevention of ongoing lead poisoning of these communities.”

Richard Meeran, Head of Leigh Day’s International Department and Zanele Mbuyisa have collaborated on claims against multinationals for the past 20 years. They worked together on the UK litigation against Cape plc brought by 7,500 asbestos miners that settled in 2003. Prior to that, in the 1990s, Richard Meeran acted in the mercury poisoning claims of 42 Thor Chemicals workers. They joined forces with Legal Aid South Africa and the Legal Resources Centre in the silicosis test case litigation on behalf of 23 President Steyn gold miners, which settled in 2013. Meeran & Mbuyisa worked together on the silicosis claims by 4,385 miners against Anglo American South Africa and AngloGold, which settled in March 2016 and led to the establishment of the Q(h)ubeka Trust.

Protecting artisanal miners from consequences of the COVID-19 pandemic