HS2 environmental campaigners have been given a High Court hearing on Thursday, 28 October in their claim against the impact of the HS2 tunnel in the Chilterns.

The legal action seeks to save the River Misbourne, one of a number of rare chalk streams, sitting in an Area of Outstanding National Beauty (AONB) near Shardeloes Lake, and the groundwater in the underlying aquifer which is also at risk.

Misbourne Environmental Protection Limited (MEP), a group of concerned local geologists and conservationists, applied for judicial review of the consent given by the Environment Agency (EA) for the twin bore tunnel to be constructed under part of the Chilterns AONB.

Mrs Justice Lang originally refused permission for that application, leading MEP to ask for that refusal to be reconsidered at an oral hearing. The Court then expedited the hearing, because the tunnelling is due to commence in the locations of concern by mid-December.

The campaigners, represented by law firm Leigh Day, argue that a major pollution incident at Chalfont St Peter earlier this year has laid bare the uncertainty of the methods, risks and impacts of the HS2 tunnelling project using huge machines at just 18m below the river bed in areas of structureless chalk with substantial fissures that have laid undisturbed for centuries.

Under Schedule 33 para 52 of the 2017 Act, which put HS2 into law, HS2 Ltd must submit plans for the tunnelling. However, it is argued that the EA gave consent for the river crossing section of the tunnelling before appreciating the full environmental impact of the methods to be used in the operation of the tunnel boring machines (TBMs)

The ventilation shaft incident at Chalfont St Peter released approximately 2500m3 of Bentonite slurry into the aquifer via fissures in the chalk. MEP argue that this displays the huge flaws in the HS2 engineers’ understanding of the geology and after which the EA should have updated its assessment of the all-round impact of the project.

The incident and its resulting implications for the impact of the tunnelling on the river crossings mean the work could be in breach of the EU directive protecting water quality through the effect on river water and groundwater levels, and the release of Bentonite slurry and cement grout, which HS2 assume will solidify before it can be washed into the groundwater.

MEP is applying for permission for judicial review on the following grounds:

“The water bodies affected by this vast tunnelling project are some of the most important in South East England. The Aquifer supplies 20 per cent of London’s fresh water. Shardeloes Lake carries an abundance of unique wildlife and is a visually stunning body of water popular throughout the Chilterns. The River Misbourne is a globally rare Chalk Stream and one of only 210 left in the world.

“We want to force the EA to reconsider the entire tunnel project, take proper account of the Water Framework Directive, and consult interested parties before reaching a decision. This should result in a deeper tunnel running entirely through solid chalk when passing under the Misbourne, and external monitoring of the tunnelling operation, to ensure an immediate response to any incident which might endanger the Aquifer, Shardeloes Lake or the Chalk Stream.”

“When the HS2 project was approved in outline by Parliament, major assumptions were made, and assurances given, about the plans. It is now apparent that the EA did not, despite promises, ensure that all potential risks to the river and the surrounding environment had been mitigated, before it licensed the tunnel construction. It is for that reason that our client believes that there is an arguable case that the EA’s consent was unlawful and so should be quashed.” 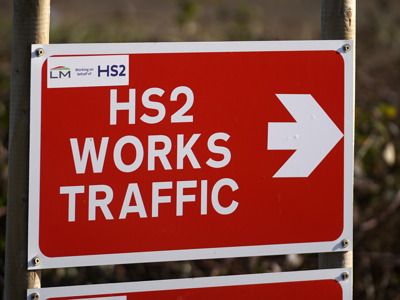 Leigh Day lawyers have written a second letter to HS2 Limited to call for a halt to works at Jones Hill Wood, Buckinghamshire since the discovery of Barbastelle bats at the location.

Broadcaster and naturalist Chris Packham CBE has threatened legal action against the Government over plans to destroy ancient woodlands from October onwards in preparation for the HS2 railway.