Freedom from Torture has made an urgent appeal to the Information Commissioner’s Office (ICO) to secure the release of vital consultation reports before the Nationalities and Borders Bill becomes law.

The Bill, which implements aspects of the Government’s controversial New Plan for Immigration (NPI), is due to have its Third Reading in the House of Commons this week.

However, Freedom from Torture is extremely concerned that MPs will be voting on the Bill without having seen the results of a major consultation exercise into the NPI, because the Home Office has refused to release the results.

The Home Office commissioned Britain Thinks, an “insight and strategy consultancy”, to run a six-week consultation into the NPI in Spring 2021, prompting 8,590 responses to an online questionnaire. Usually, the Home Office follows up such an exercise by sharing a “consultation grid” to explain which aspects of submissions will or will not be taken on board.

However, in this case the Government published a 22-page document after the Bill had been introduced, setting out only its own broad brush response to the consultation. It did not provide any detail of other consultation responses or set out the basis for its own response.

A Freedom of Information request by Freedom from Torture to see the Britain Thinks consultation responses and documented conclusions or recommendations was refused and an Internal Review upheld the refusal in January 2022. The Home Office confirmed that it held the information requested but said its own response to the consultation contained enough information to “sufficiently inform the public” and cited Section 35 of the Freedom of Information Act to justify its refusal to disclose the requested information. Section 35 allows information to be withheld if it relates to the formulation or development of government policy.

In its urgent appeal to the Information Commissioner to order the release of the material, Freedom from Torture points out that the Freedom of Information Act (section 35(2)(a)) clearly states that “any statistical information used to provide an informed background to the taking of the decision is not to be regarded….as relating to the formulation or development of government policy” and it is incumbent upon the government department to specifically explain what potential damage to policymaking could flow from disclosure of the content of the information requested.

Freedom from Torture stresses that the release of the information is in the public interest, and points out that the consultation exercise by Britain Thinks was carried out at great expense to the public purse.

The campaign group has asked the ICO to consider its complaint urgently, and deliver a response by 18 March, and in advance of voting on the Bill.

"Time and time again, this Government misreads and misrepresents the public's compassion for refugees. It is refusing to release the findings of a vast public consultation on the New Plan for Immigration because then it would have to admit that the public does not want the heartless and anti-refugee proposals being taken forward in the Nationality and Borders Bill.

"These same proposals, which would see Ukrainian, Afghan and other refugees criminalised, sent offshore for processing and denied lasting protection in the UK, were voted down by the House of Lords last week. They have been condemned by the UNHCR, legal experts and Ban Ki-moon as unlawful and a threat to the global refugee system. As the Government is desperately scrambling to keep up with the outpouring of public sympathy towards Ukrainian refugees, it is unthinkable that they would push ahead with this grotesque and unpopular piece of legislation.

"Legislation must not be made in the dark. We are appealing to the Information Commissioner to compel the Government to publish the findings of this consultation because we believe that MPs, who will vote next week as the bill returns to the Commons, deserve to know exactly how unpopular and dangerous these proposals are."

Freedom from Torture is represented by Leigh Day solicitor Carolin Ott, who said:

“Our client is extremely concerned that Members of Parliament are being asked to debate and vote on the controversial Nationality and Borders Bill without any adequate understanding of what the public thought about some of its key content set out in the New Plan for Immigration. At a time when Europe faces the fastest growing refugee crisis since the second world war and the Bill has been described as ‘the single biggest legal assault on international refugee law ever seen in the UK’, there is clearly a strong public interest in the requested information being disclosed on an urgent basis.” 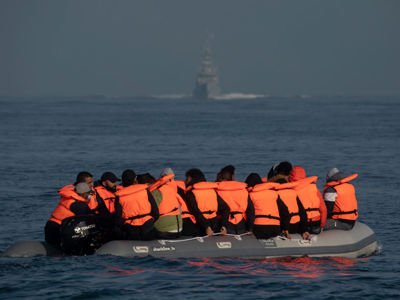 Ukrainian people who want to take refuge in the UK may have to take their chances with people smugglers under current laws, and under the impending Nationality and Borders Bill they could be liable to prosecution and may be returned to the first country they arrived in after fleeing the war.